We have a home shortage not a tax shortage

Paul Sullivan: We have a home shortage, not a tax shortage

Opinion: Vancouver holds public land that could be used for affordable housing. But senior governments must fund construction costs and restore rebates
-Vancouver Sun, The Province News, and national blogs

We can learn from esteemed, 91-year-old economist Thomas Sowell, who said: “It’s hard to imagine a more stupid or more dangerous way of making decisions than by putting those decisions in the hands of people who pay no price for being wrong.”

Sowell was commenting upon politicians and bureaucrats but he may also include those unelected, unaccountable voices that influence government policies and make our housing crisis worse. Activists within think-tanks and universities write studies advocating more taxes and “green” regulations that drive up housing costs.

Generation Squeeze and the Canadian Centre for Policy Alternatives both released reports recently with divisive attacks on existing and future homeowners, demanding that they pay thousands of extra dollars annually in “progressive,” “equity” or “land-value capture” taxes, on top of the thousands of dollars in constantly rising property taxes.

They justify additional taxes on the false argument that homeowners’ rising property values — often their largest investment — is “unearned,” while they never go after “unearned growth” in other investments, including pensions. They claim that those who saved up and bought their own homes are responsible for solving the housing affordability crisis of others.

Five years of various experimental new housing taxes have failed to significantly increase affordable homes for rent or sale. The large increases in both home prices and rents show these new taxes failed. Vancouver now has the highest rents in Canada and second-highest house prices. More of our city’s small businesses are also closing, from new tax applications to unbuilt homes and “airspace” above their one-storey shops 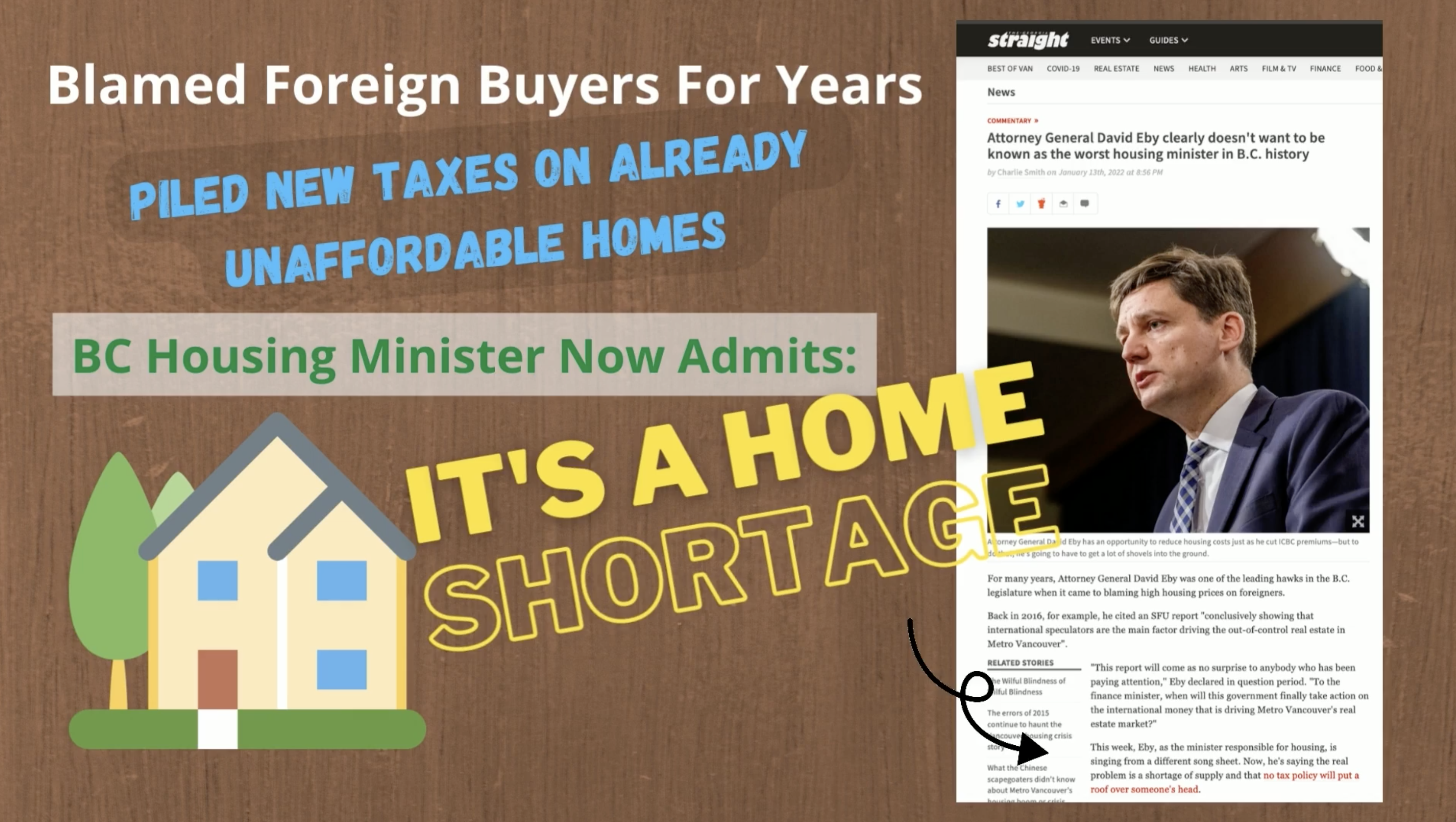 Commendably, B.C. Housing Minister David Eby rejects more new housing taxes he previously championed. Apologizing for his role in blaming foreign buyers for rising home prices, Eby admits we have a home shortage and that more taxes won’t help. This is welcome news to single-family homeowners paying the highest property taxes in Canada and the 73,000 B.C. seniors whose debt to the provincial government through property tax deferrals has grown to $1.6 billion, up 96-per-cent from $815.3 million in 2016.

Given the federal government plans to increase immigration to 400,000 people a year from 250,000, where’s the plan to house both newcomers and existing residents struggling to buy or rent?

When you have a shortage of anything, prices rise. Yet housing starts are dropping, with the B.C. government projecting them to fall to 31,027 in 2025 from 37,734 in 2021. And according to a Bank of Nova Scotia report released last month, Canada already has the lowest housing supply in the G7, with just 424 homes per 1,000 people. We don’t have a shortage of taxes.

So what should be done?

Vancouver holds public land that could be used for affordable housing. But senior governments must fund construction costs and restore rebates. Despite boasts by local politicians, B.C. received just 0.5 per cent of the money spent for social housing under the national housing strategy — a shocking $7.3 million of $1.47 billion.

Vancouver’s byzantine permitting process, which has a backlog of 500 applications for detached homes, duplexes and laneway homes, must be fixed. Why has the Molnar Group been waiting five years so far for permission to build rental housing at 11th Avenue and Renfrew that includes 20 per cent below-market rents? While the city slow walks permits, the company is also charged $250,000 a year in Empty Home Taxes, making affordable rental projects a financial challenge.

A couple quick fixes would be for the city to approve cookie-cutter building designs that could be fast-tracked if submitted by qualified builders. Vancouver could also offer, like other communities, fee waivers, tax rebates or additional density on more rent-to-own developments.

Solutions to the housing crisis will be found in the many ways government can encourage increased construction with carrots, not through the sticks of endless new taxes and red tape.

One Vietnamese Family's Journey to Home Ownership-What's Yours?