VANCOUVER BC —Vancouver home and business owners are paying the second highest annual percentage property tax increase—at 7%—in Canada to prop up ballooning budgets for non-core services, according to new research by an SFU economist.

Dr. Andrey Pavlov, SFU’s Professor of Finance & Real Estate, reviewed major Canadian cities’ property tax increases that fund typical civic budget services.  "Vancouver homeowners face the second highest annual increase in property taxes in Canada, on top of already sky-high levels. Average Vancouver single-family home owners, for instance, pay the highest property tax in Canada, ahead of Toronto, Ottawa, Calgary, or Victoria. But don't hold your breath if you're hoping to get better services. Of the  “2020 Council Priorities”, only 10% is for 'core services that meet residents’ needs'. Use your imagination how the remaining 90% is spent." 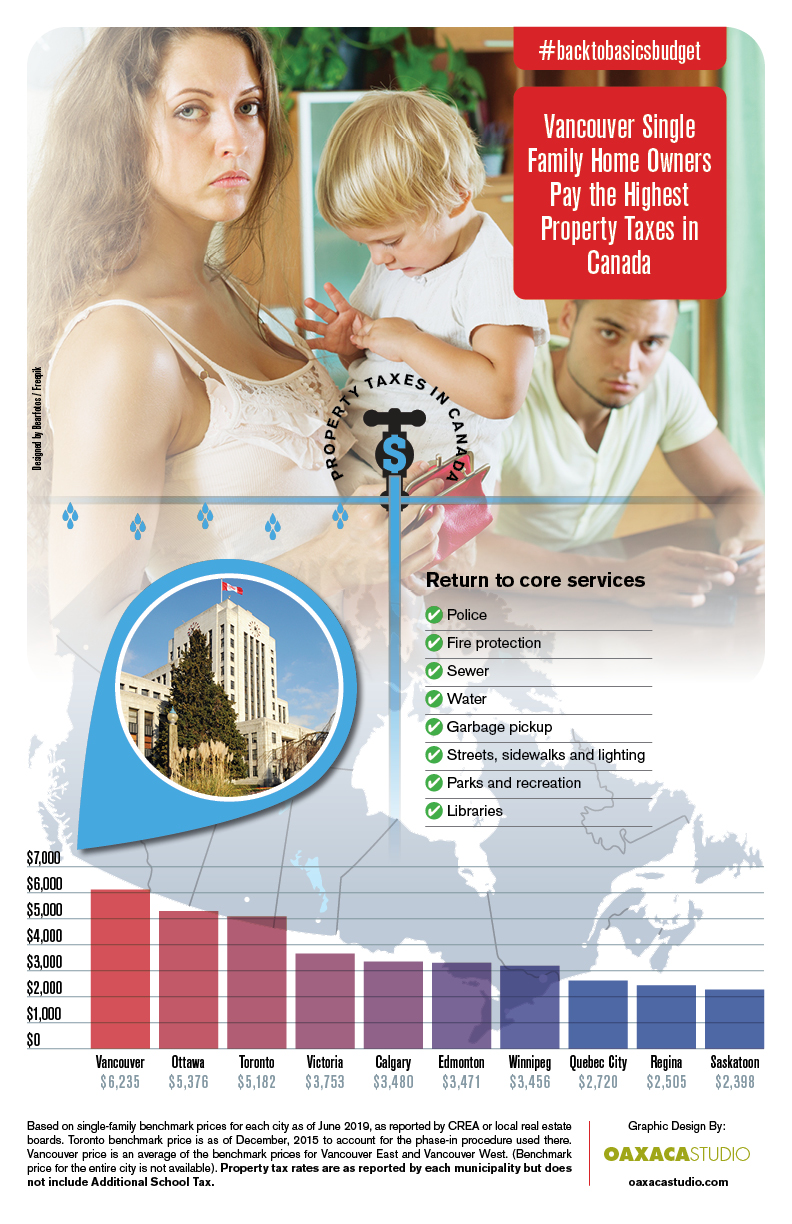 Paul Sullivan, Property Tax expert and managing partner BCS Real Estate, believes “the City of Vancouver has ignored basic civic services like removing street garbage, repairing streets, mowing boulevard grass or even snow removal when we needed it last winter. Remember all the stranded buses on Granville? Instead, Vancouver strays well outside their lane, fighting pipelines and funding dubious harm reduction programs that credible health experts have found ineffective. More recently, under the Mayor’s watch, the city spent millions on office renovations and high-end furniture during the pandemic when so many people are working from home.”

“For those who still have jobs or viable businesses in the private sector where 90% of the COVID job losses were, they’re seeing wage freezes and pay cuts. Governments seem to be tone deaf to pleas for tax reductions as they ramp up spending of your money, calling that an ‘investment’,” Sullivan adds.

The Vancouver Sun reported the population of the City grew by only 10 per cent over the decade while City staffing costs increased by about 21 per cent.  The City also asks voters at every election to approve borrowing of hundreds of millions of dollars to finance “emerging priorities”, overhead and capital projects. All cities have similar obligations to provide traditional civic services, says Pavlov, so why is Vancouver’s 7% annual property tax increase nearly triple the inflation rate or most people’s wage increases?

Meanwhile, governments continue to use residential and business property owners as bank machines, forcing many beloved local businesses to close, like the Dover Arms and Three Vets.  The government taxes the airspace above retail stores based on what can be built rather than what’s existing. After years of business complaints about these punishingly high taxes, the city “simply shifted a couple percentage points off the business tax burden over to residential, which doesn’t address the problem — overspending at city hall,” says Sullivan.

2. REDUCE RED TAPE/REGULATIONS IN HOMEBUILDING/RENOVATING. Until that happens, few homes will be renovated or built to address population growth, local demand or tame prices.

STEPUP is a volunteer funded, non-partisan, not-for-profit registered society representing current and future homeowners and property taxpayers. We are committed to opposing policy that divides and weakens our communities for partisan gain.

Note that property tax rates (mill rates) on their own are irrelevant for comparing the tax burden across cities. Instead, the property tax dollar amount for a typical home captures the actual cost of city services homeowners face. The use of single-family benchmark prices across Canada offers the best comparison because typical single-family homes require similar municipal services across the country. Variation in the cost of these services speaks to the variation in efficiency of the respective municipal governments.

StepUP is a non partisan organization that is the voice for current and future homeowners and resident/business property taxpayers across Canada. We value economic freedom and prosperity.